During the Euco in Riga some of our members organised a wine event with Rotaract&Wine.

Wine in Latvia? That doesn´t sound logical. Well even in Latvia there are some very small wine producers,  but mostly not made of grapes, but made from other fruits. There was no winemaker near Riga, so visiting a   local winemaker, as we normally do, didn’t work out
On Thursday the night event was next to the river at Andrejostas Kvartals. Why not go there by boat? The plan was set.
A few weeks before the event in Riga was the ProWein in Düsseldorf. Our member Jasper went to the wine fair and negotiated with winemakers to donate bottles for charity. At the end of the day 67 bottles were donated.  A very practical coincidence was that a Rotarian from Düsseldorf would travel by car to Riga and could take all the bottles in his trunk.  Lukas brought all bottles safely to the hotel, so 1+1 was much more than 2.
We were able to negotiate a special deal with local boat rental. 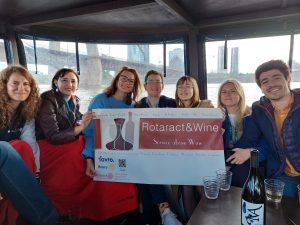 A small anecdote about the glasses. The day before we needed to buy glasses, as this was much cheaper than renting.  I brought the glasses to the kitchen of the Radisson Hotel and I asked if I could clean the glasses with their fast machine.  I told them if I would clean them in the room, I would need ages and would ruin the room. With their machine it would be done in a minute.
The lady said: ´This is the weirdest question I have ever heard, but go ahead´. In fact I didn’t even stay in that hotel, but it worked out perfectly. 54 Rotaractors and Rotarians managed to get a spot on one of our 2 boats. The event was so popular we had to disappoint a lot of people.  The weather forecast was not very promising, but in the end we had spectacular clouds and we had no rain.
The ones who made it on the boats were very happy. After one and a half hour trying different wines from Chateau Escot, Neleman, Bouvet Ladubay, Château Pierrail, Famigliadecerchio, Hatt Söner and others we (re)discovered some excellent local terroirs.  In the meanwhile we enjoyed the narrow canals of Riga and wide views over the large Daugava river. 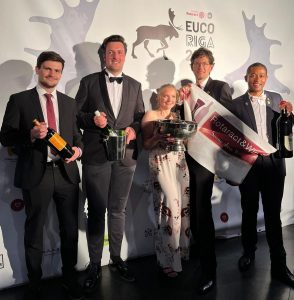 Some of the winemakers donated us Magnum and even Jeroboam bottles!  With these extra bottles we organised a lottery at the gala ball. The 100 lottery tickets were sold in a whip.   The charity goal of our event was supporting Ukrainian refugees. With the boat trip and the lottery we were able to raise 1803€ for charity!
Besides we learnt about wine and improved fellowship with more than 11 nationalities on board.
mit freundlichen Grüßen
Jasper Vethaak