Posted on June 18, 2019June 10, 2021 by admin
The Rotary Convention visited Hamburg in Germany this year. More than 25.000 Rotarians and 1000+ Rotaractors came together for networking and learning. The start was the Rotaract Pre-Convention, where the youth and future of Rotary discussed and learned about their different projects, ideas, exchanged knowledge and made new connections for working together. In the evenings, the local Rotaract Clubs organized events for Rotaractors as well as Rotarians. Friday night, the location was the Chamber of Commerce in downtown Hamburg, an amazing old building. There were country booths, where every country could present their local specialities and later a wonderful dance area for the young people celebrating Rotaract. RI president Barry Rassin visited this event to talk to and with the youth. The Saturday evening was the 35-year celebration of the Rotaract Club Hamburg-Alstertal in a local night club.
The Rotary International Convention 2019 started on Sunday with the opening ceremony. Interesting speakers and presentations highlighted the beginning of this year’s get-together of Rotarians worldwide. Besides the general sessions (which were held the following days) with more presentations about Rotary and their projects, the Host Organisation Committee (HOC) organized a lot of workshops where Rotarians and Rotaractors were welcome to learn and share experiences.
As several workshops were held at the same time, it needs good planning to figure out which ones to visit. I visited the workshop about social media for example. The audience was mixed between Rotarians and Rotaractors, and the knowledge shared was from the youth to the old. Rotarians were really interested and had a lot of follow-up questions after the presentation and used the chance to connect with other clubs and Rotaract clubs to intensify their social media presence in the future. Another workshop was „Rotaractors next steps“. This workshop discussed and presented the possibilities of Rotaractors to stay in the Rotary family after Rotaract. Interesting was that this year also Rotary eClubs were mentioned as a fantastic chance for young professionals offering flexibility for their job and career. Advantages of eClubs were also presented (the presenters were two-third members of eClubs) and Rotarians used their chance to ask and discuss the view of eClubs in Rotary. In the end, all see eClubs as a fantastic new way in life. Rotaract also has an eye of this way of Rotary for their young professionals, as it’s not possible for everyone to stay in the same city and Rotaract club all the time.
My last workshop was about „unconscious bias“ which was really interesting. Simple biases in everyone’s daily life and how to deal with them. And also realizing them. Every human has a kind of bias but knowing them opens the chance to work with and against them. It’s not only the typical Black / White / Asian bias, it’s some on your daily life: is a woman under 30 as good as older ones; is a man in a wheelchair reliable enough for this job; can a woman do the same job as a man; or the typical male jobs or female jobs like construction worker or nurse. Being open to everyone, help people who need help and be open to all different kinds of cultures. This was really an inspiring workshop.
Besides the daily program, there were also evening events organized, like visiting the Elbphilharmonie, or a ballet. Also free events were available like a water and light concert in a park or a Bavarian evening for networking.
Besides these events, the House of Friendship welcomed everyone with hundreds of booths to get informed about projects, Rotary clubs, Rotaract and Interact and other interesting topics. For example, the water purification project PAUL is a simple way of getting clean water, but there were also other water projects for the same goal like a water vaporization bowl for clean water. Both projects are helpful and depending on the situation and place on earth. Rotary clubs informed about their projects, Rotaract and Interact called attention on them from Rotarians and also big projects like Shelterbox were there to inform people and present their project. The whole area was split into two big halls where the hungry mob could also find food and drinks between their sessions and/or just walk around and enjoy. Everyone can decide if he/she wants to learn, go to workshops, share experiences, inform about projects or clubs, also buy clothes and other Rotary/Rotaract stuff like shirts, ties, pins and everything else. Or just talk with other family members and network. Getting contacts from a lot of countries, for your club life or just having someone to visit at your next vacation. Networking is everywhere.
Following the Rotary slogan: Be the inspiration. Share your experience and let others know what you do. And be open to get wonderful impressions of others. Rotary connects the world. Be part of it and feel the power of Rotary. 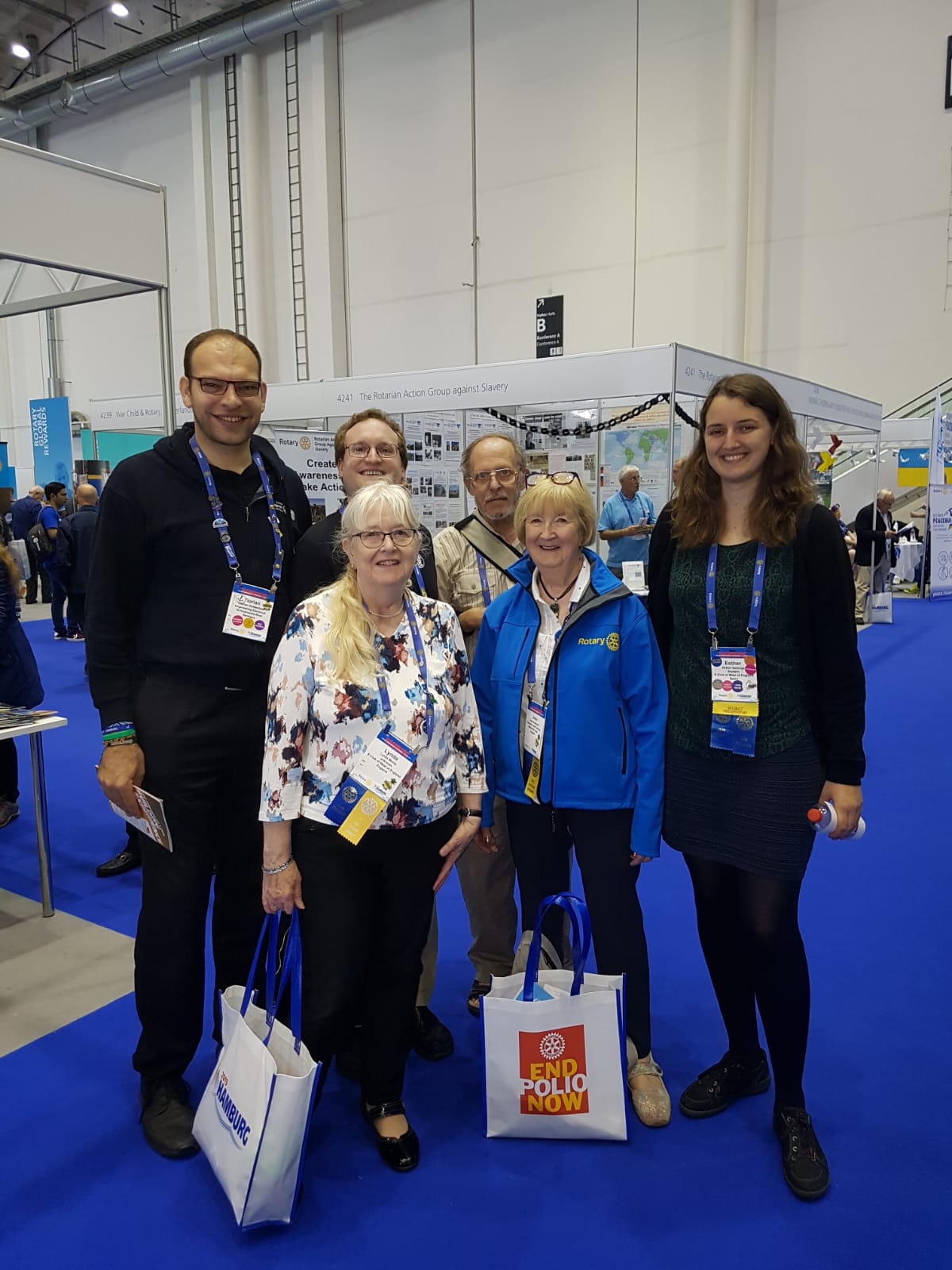